Everybody deserves a Lazy Day!

That is just what I did.  Exhaustion and the early onset of a cold kept me prisoner.  We watched our Fire Stick/Netflix and binged all day, taking naps here and there.

Finally the latter part of the day around 3:00ish, we decided to get up, take showers, and walk down to Bourbon St, to get some dinner.  This is where everything gets interesting.

We crossed the roads and intersections and finally made it to the French Quarter.  It was like we stepped into another world crossing an invisible barrier.  Now imagine, the streets our resort condo is on, the area looks like any big city with tall buildings, traffic, tons of people on the sidewalks, littered with shops and restaurants.  The only difference is the trolley tracks running right in the middle of the Main strip.

When we stepped through to this new dimension, the buildings shrunk in size, the streets grew thinner, the noise of vehicles and horns blaring disappeared and was quickly replaced by loud music, and laughter.

We crossed over another intersection of these smaller streets where shops, bars, restaurants, and other enticing indulgences housed the street level.  The second and sometimes third story levels contained apartments condos with balconies overlooking the streets below.  Crowds of people lined the streets, drinking, laughing, and watching the street performers.

This was the place!  The whole reason I wanted to come to New Orleans, to step into the world where The Originals and many other favorite TV shows were based.

We walked and walked dodging large crowds until finally we came to a less crowded area and the shops disappeared.  We only assumed this was more of a residential area with a Blacksmith Shop Bar in the center of it all.  So we decided instead of turning around and fighting our way through the drunken crowds, we cut down a side street, and then headed back.

The curb appeal was beyond beautiful and enticing!  This made me wish I owned one of those upper level condos and lived here.  I could imagine sitting on a balcony and watching the crowds below or enjoy the quiet side street with a cup of coffee and my laptop.

When I mentioned this to the hubby, he laughed.  He told me that I would hate it because the all-nite crowds partying and drinking, along with the loud music would keep me awake especially during Mardi Gras.  With a poor imitation of my female voice he quoted something I say quite often at night when I roll over ready to go to sleep, “Honey can you please turn the TV down, just a little bit?”

And with just one giggle and a  teasing comment, the hubby shot an arrow through my dream bubble.  Ugh!!!  The bad thing is, he’s right!!!  I guess I am getting old!

Strolling through the quieter streets where there were more shops emphasizing art and music, we came across a small parade of jazz players leading the way for a bride and groom.  Still dressed in their wedding attire they bounced black and white frilly umbrellas in the air while they walked a dancing jig.  Following behind them I assume were the wedding party, family, and friends dancing the same jig and waving white handkerchiefs in the air.

After they passed we cut down another side street headed back to that invisible barrier between two worlds where we saw a restaurant we wanted to eat.

Before you know it there was another parade with music coming down the small street with two huge floats.  The first float was decorated for the Saints football team.  The people onboard wore the colors and jerseys in spirit of the team while they threw plastic footballs and colored beads out to the onlookers below them.  The second float did the same thing but it was decorated with the colors and jerseys representing the Dallas Cowboys.

Yea, hubby said there was a football game between the two teams this particular weekend.

So on we went finally weaving our way through the crowded street and finally arriving at the Bourbon House.  I hesitated slightly because looking through the windows, the tables and environment itself looked extremely fancy or formal.  The waiters dressed in black with low lighting and white table cloths on the tables.   I felt under-dressed for such a place.

Quickly the hubby pointed out that there were people sitting at some tables that had on shorts and t-shirts.  Well, at least were better dressed than they were.

We were seated pretty quickly and enjoyed a real crab cake for an appetizer.  I mean real!!!  I will forever be comparing crab cakes back home to this crab cake.  Real crab meat without all the breaded fillers.

Hubby ordered a seafood platter and I got a catfish plate.  Of course we had to stick to our alcohol tradition and he ordered a Corona while I ordered on of the signature cocktails, Curious Cat.  All I can tell you is that it had honeysuckle nectar and that is what caught my attention.  It was so sweet and so delicious.  I drank two of them!

While we enjoyed our meal, I noticed on the upper balcony dining area were a group of camera men or crew.  I got excited because you could tell they were professional in the TV world sense.  They seemed to be filming a large table with men dressed in suits.  I couldn’t see the men’s faces only their backs.

I continued to watch upstairs as I ate and they hubby caught my attention and asked me if I was fascinated by what was going up there.  Of course!!!  There are so many shows and movies filmed in New Orleans, I was really hoping to see some celebrity, maybe sneak a picture with my iPhone.

When the cocktail waitress came to check on us we asked her what was going on with the camera crew.  She told us that it was some Southern Living Reality show.

Hmmm, interesting.  I will be on the lookout for that.  Just so the hubby and I can point out the moment they are in the restaurant and we can point at the TV and tell our daughters, that we sat just down below them. Ha ha.

We finished our meal without dessert, bellies full, and hubby went to pay the bill!  I am so lucky he didn’t have stroke right there!  Of course we knew the entrees were a little pricey but our bill was just at a hundred and fifty.  Eeeeck!  Those alcohol drinks were twelve a piece.

Oh well! We are on vacation right!!!!

We ventured back towards the main strip that would lead us back to our condo and enjoyed the walk there as well.  At night all the lights are bright on the tall buildings and for a moment, I felt like I was in New York or something.  I kept looking up into the sky to see the lit up buildings.  I had to stop though before I ran into someone.

We hit the Starbucks and then walked back to the condo to enjoy our warm beverages.

I have to say that I LOVE the French Quarter.  Everyone is friendly, smiling, and just having a great time enjoying life! 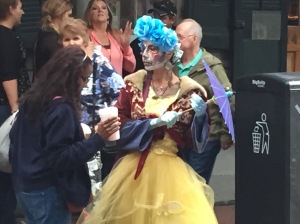